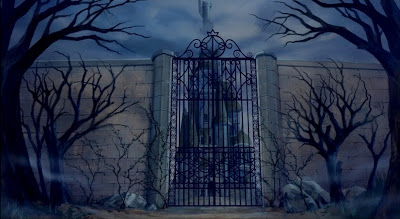 Interested in reading more? Then just Google "3D BEAUTY AND THE BEAST" and you'll get a variety of fascinating articles about its re-invention. Disney is committed to delivery the original film in a new way. Very enthusiastic reviews after a Showest preview indicate it will be a phenomenal experience.

As the Peter Allen song says "everything old is new again!"

In keeping with this weekend's BEAUTY AND THE BEAST theme, the magnificent piece of background art above features the gated entrance to the Beast's estate.
Posted by ROB RICHARDS at 2:56 PM

Labels: BEAUTY AND THE BEAST

AH so exciting! I love this movie, it's one of my all-time-faves.

I have no words to describe the gold in your blogposts. Such an amazing piece of art which takes years of practice and do it in right direction. those who want to make carere in animation should master and study 2d animation online courses. Fantastic stuff. I totally loved it.