I've been studying the gorgeous B/G art from Mary Poppins for years.

Tonight, looking over the animated section, I had an AHAH moment and realized I had two pieces I could join to create a huge pan B/G - five hours later, it's done.

And yes, I think it's SUPERCALIFRAGILISTICEXPIALIDOCIOUS!

Remember to click on it to see the full size version.  :) 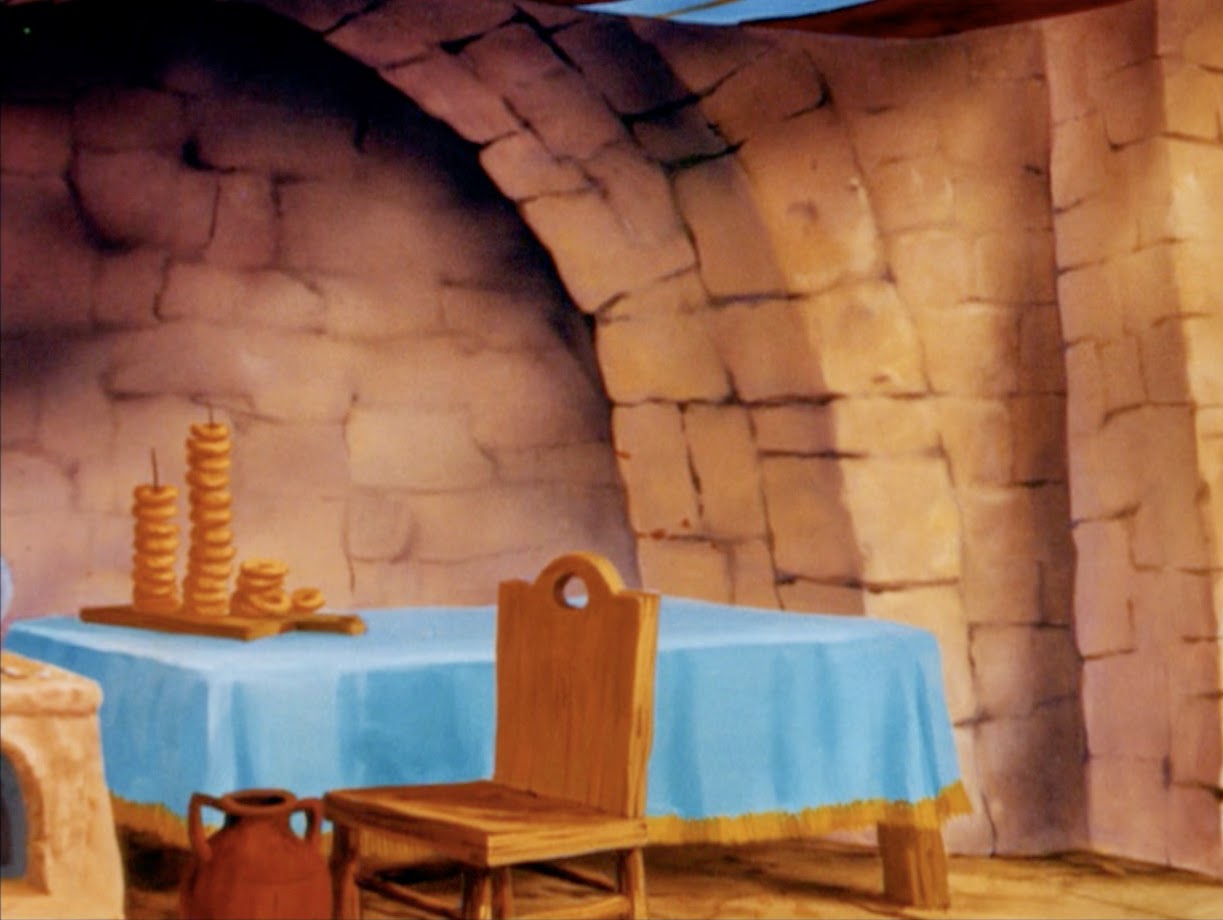 Labels: Disney, THE SMALL ONE 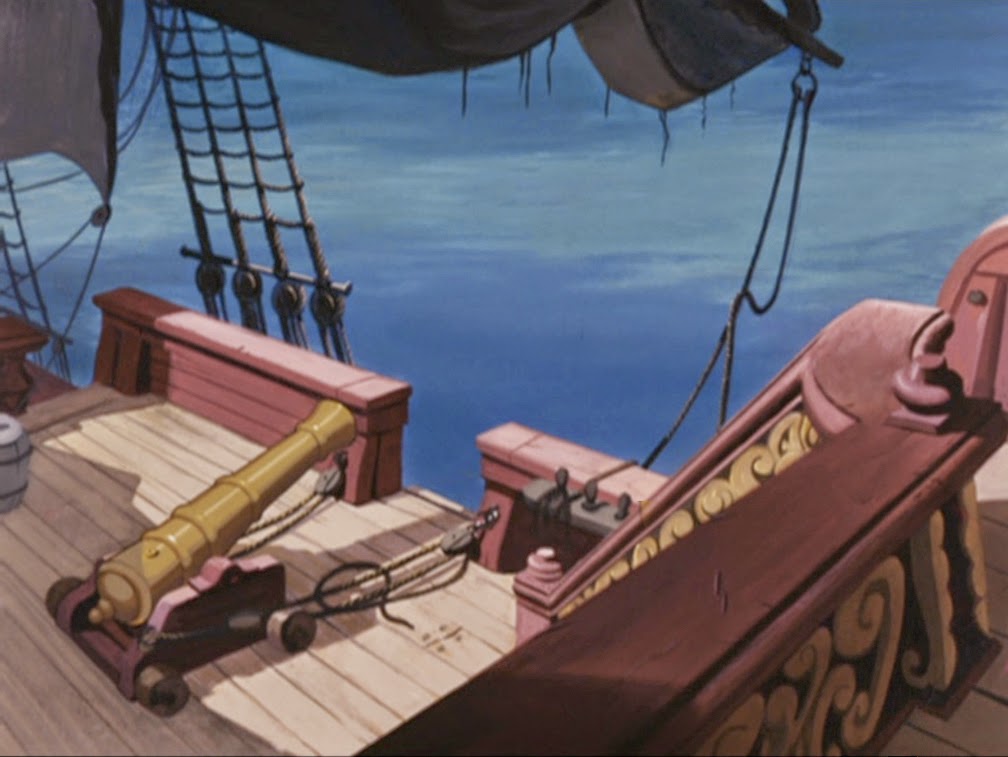 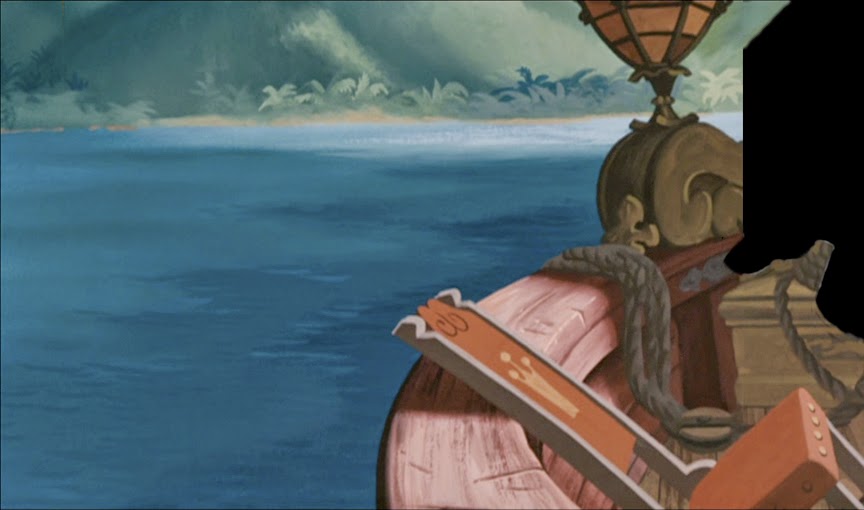 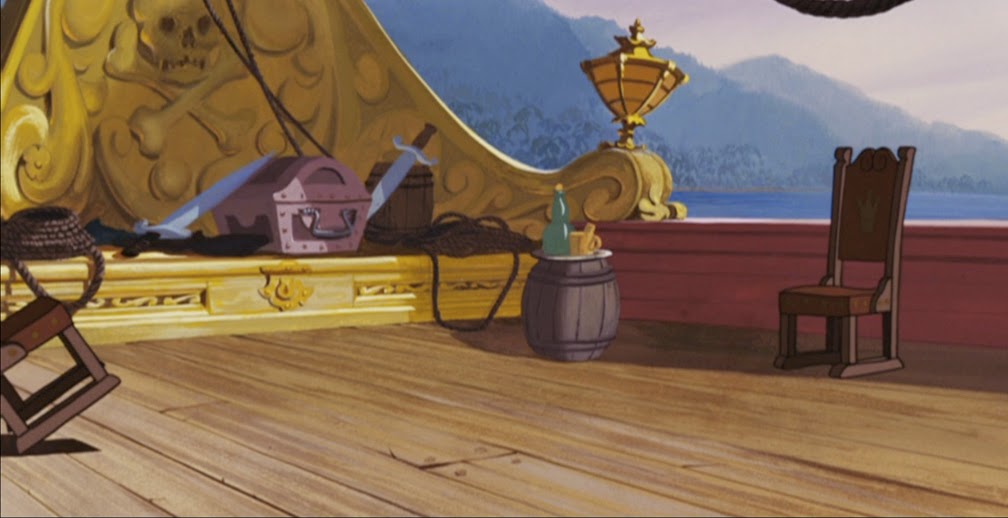 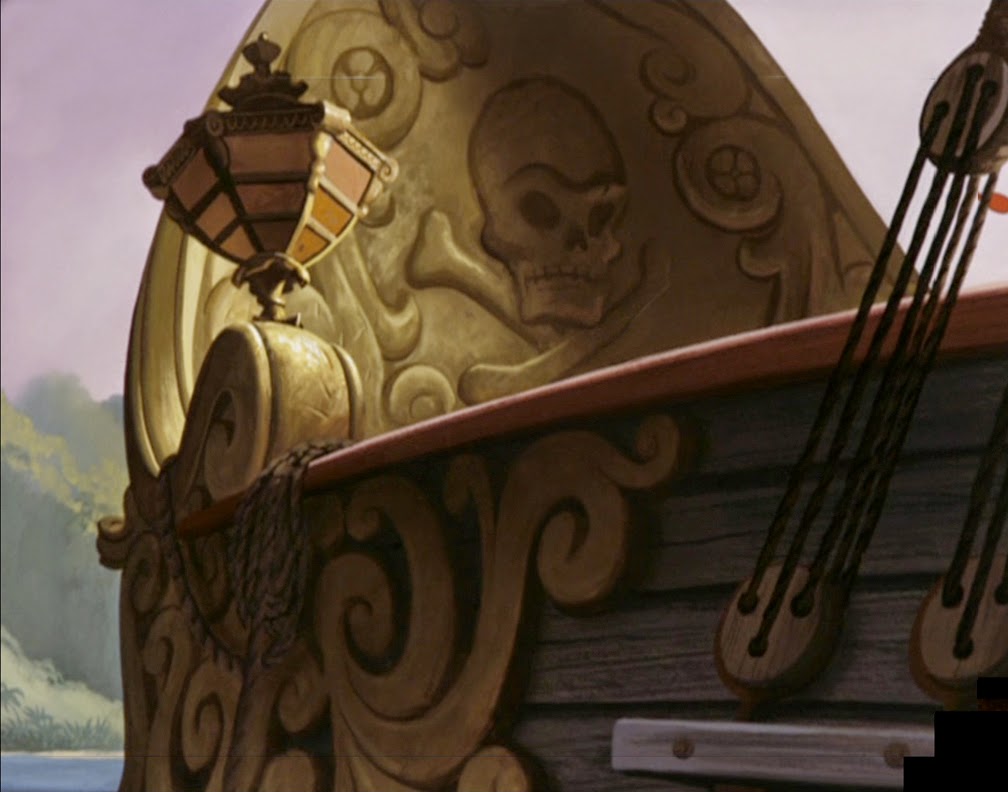 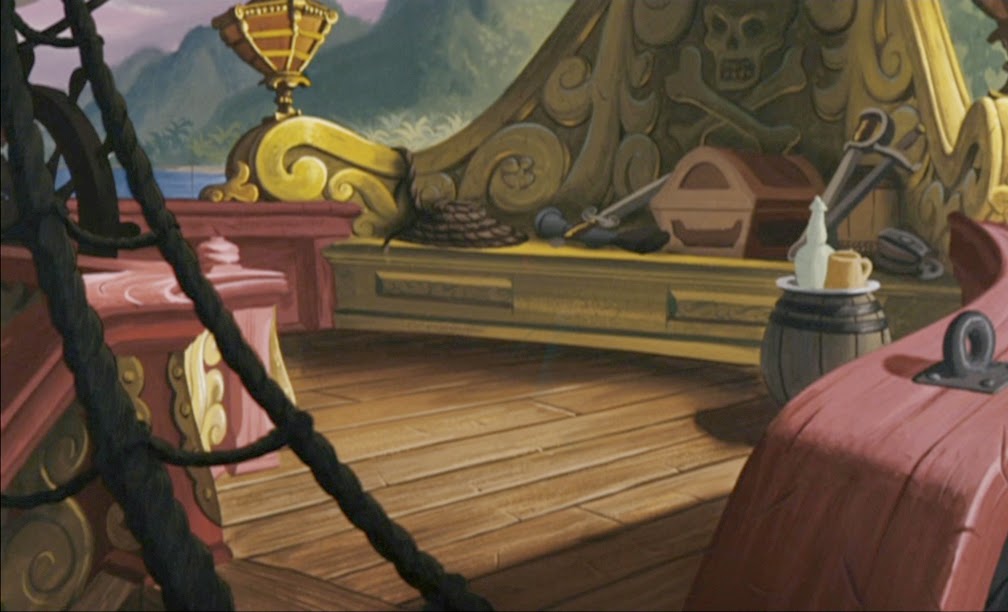 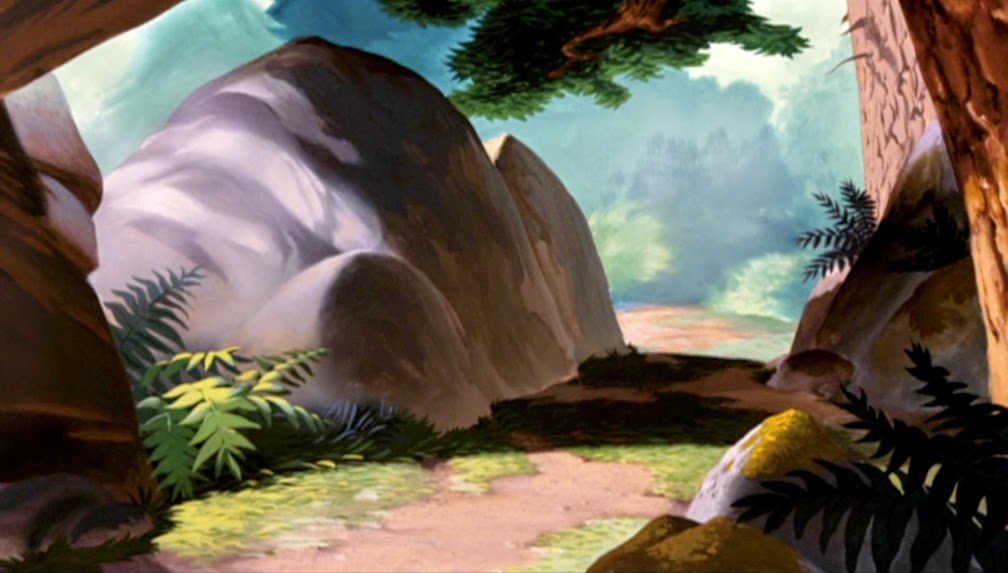 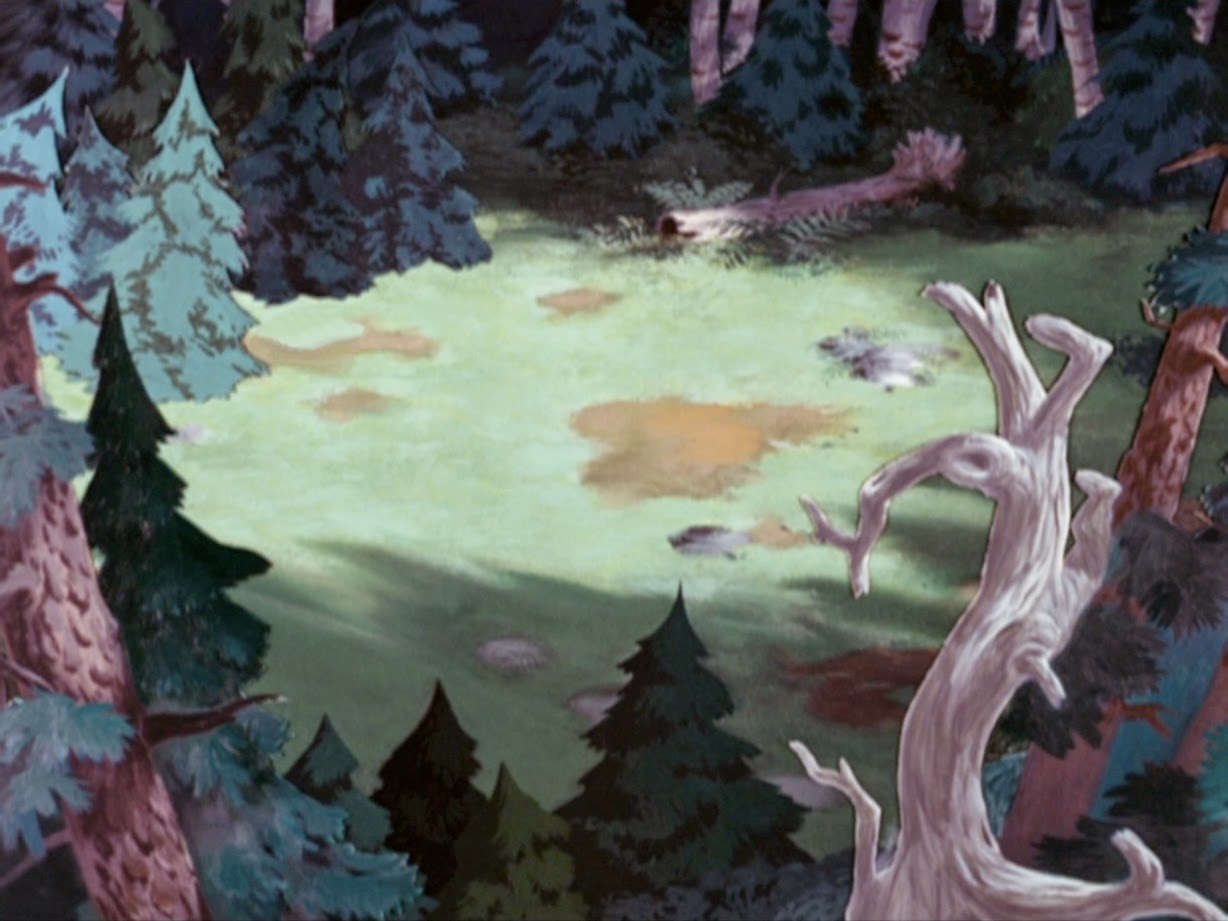 This artwork is a visual feast - and screams the influence of May Blair. These gorgeous backgrounds predate JUNGLE BOOK by a decade but the design influence is unmistakeable.

Feast your eyes on these!!! 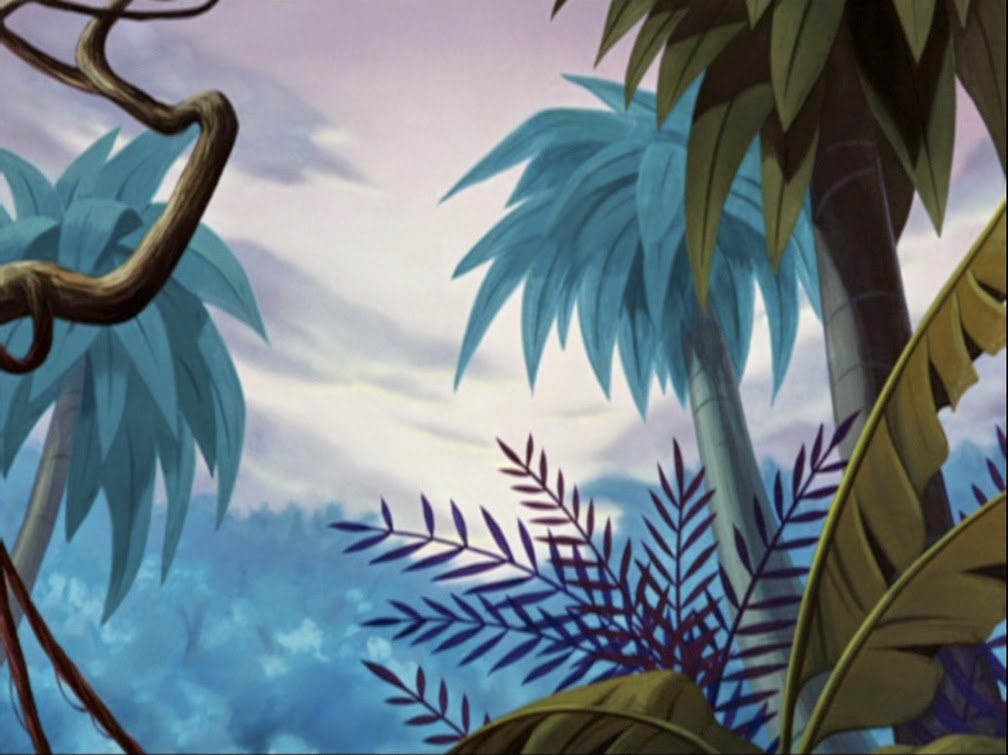 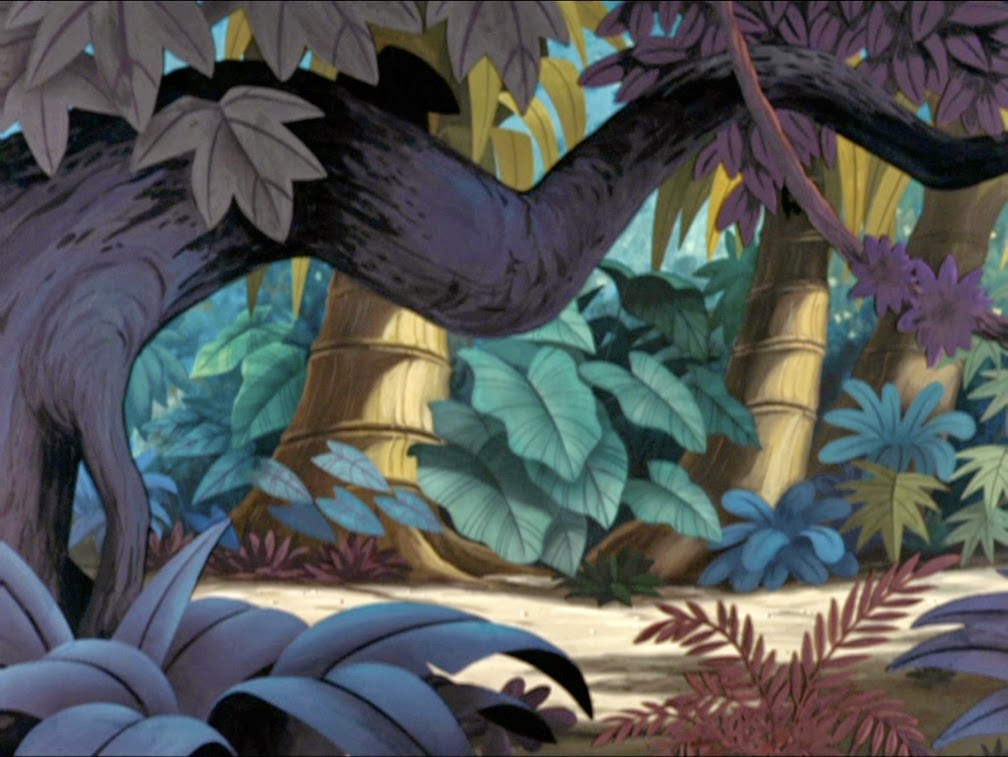 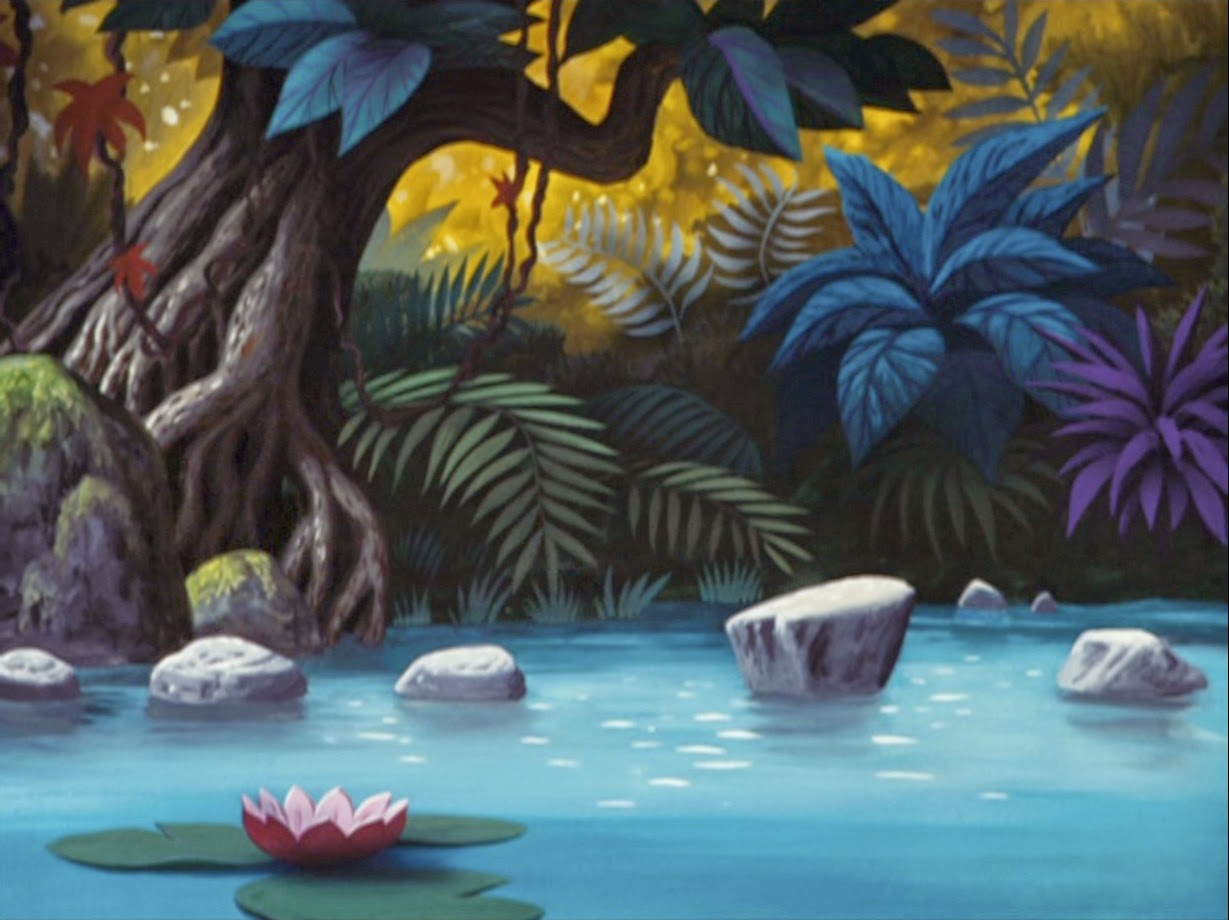 this shot starts with a suspicious looking rock (cel overlay) 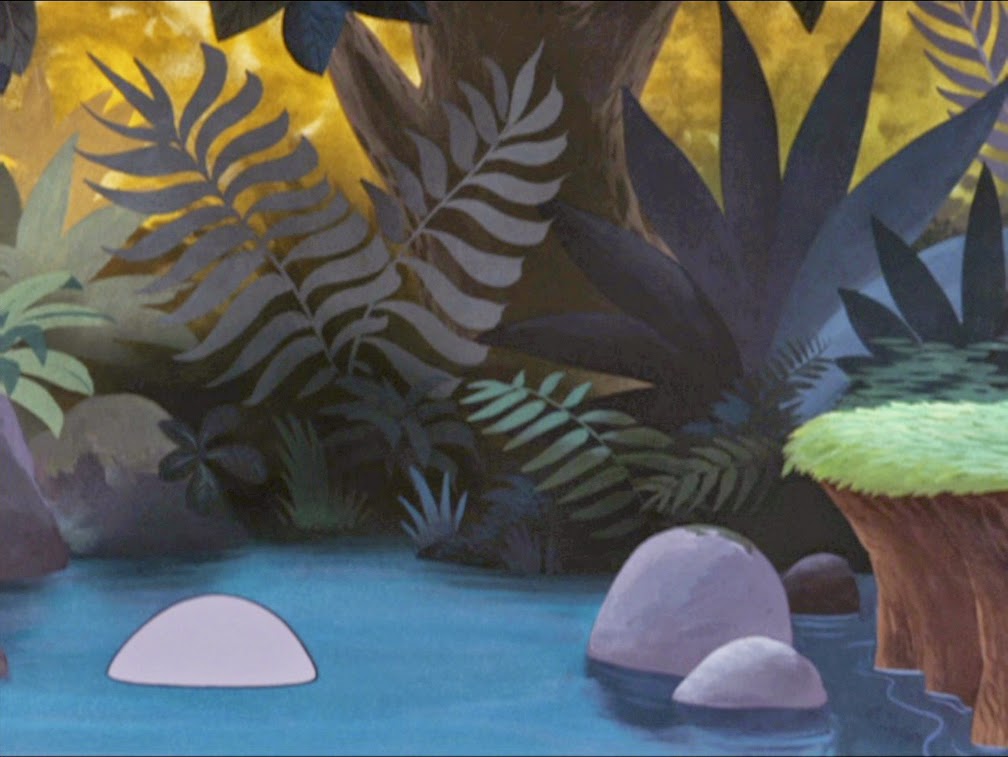 then zooms out as the hippo rises from the water!

Here is the background with cel characters digitally erased...

Savor the nuance and subtlety of this piece 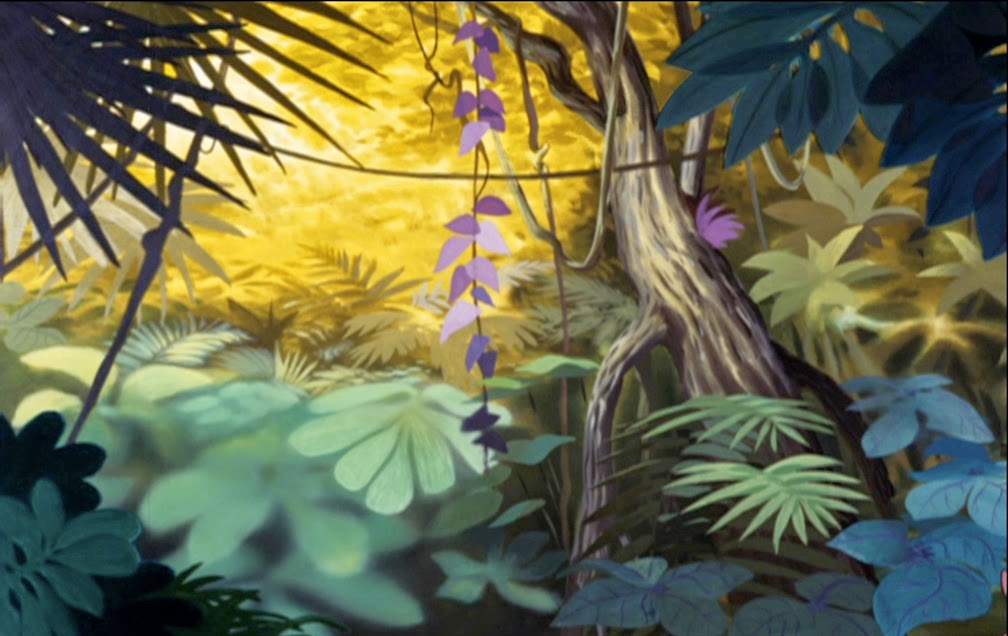 Here is the pan B/G from the FOLLOWING THE LEADER sequence
the boys remain steadfast little soldiers on the left!

So you might enjoy a closer look - here below are left and right sections.

Today, another digital restoration of art from Bambi.
This is a reconstructed pan BG.

To see the extraordinary detail, click on the images.
I've added larger left and right halves below! 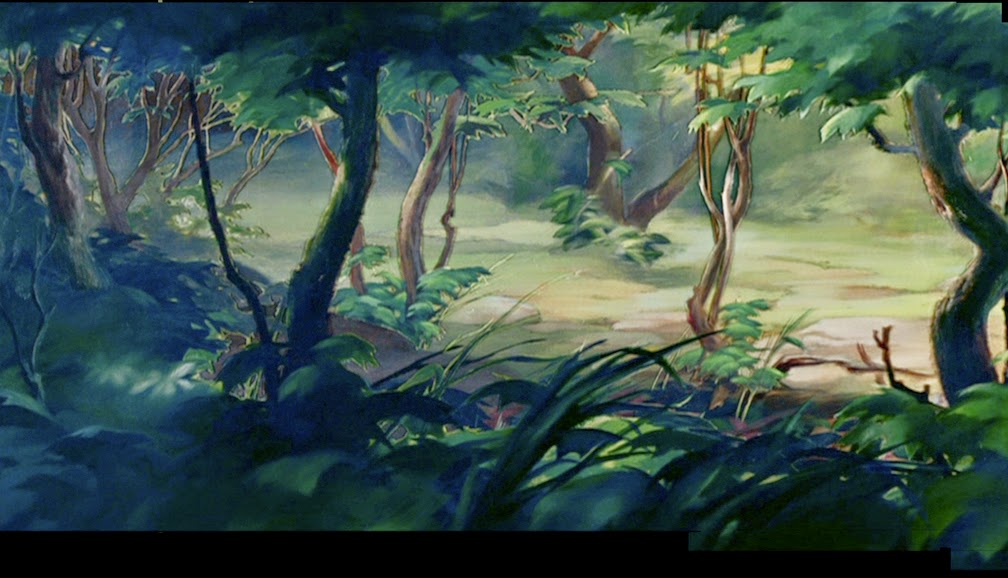 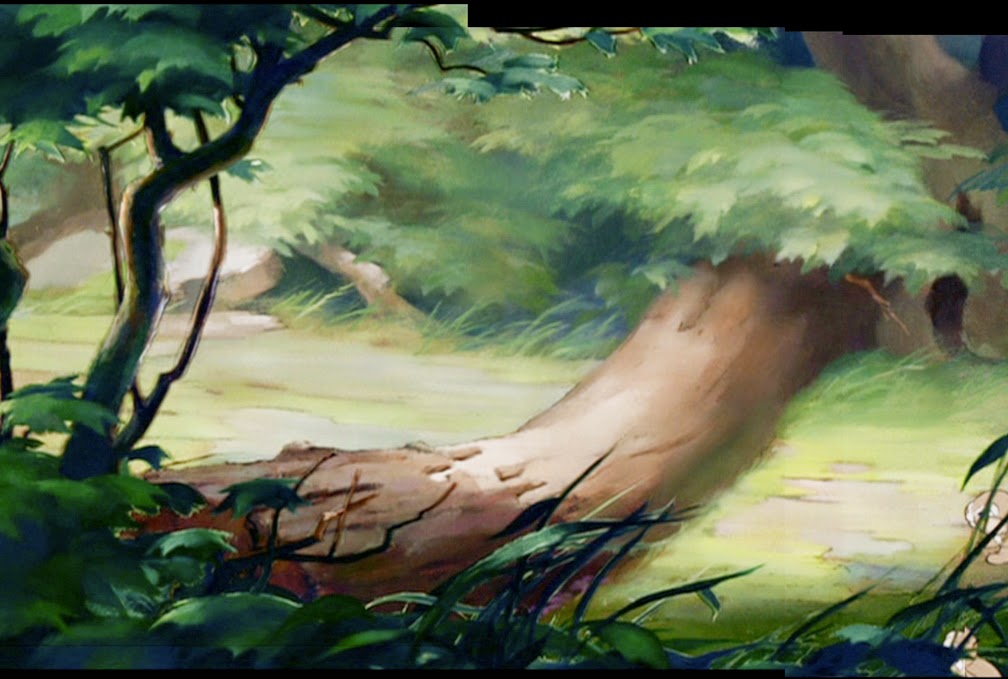 I've always loved the background art developed for the WINNIE THE POOH films. It's texture is unlike any other (but seemingly influenced by the Xerox art designs from 101 Dalmatians).

As usual I have digitally composited pan backgrounds so you can see them in a way we never saw them in the films!

Here's a set of beautiful and charming backgrounds from the first WINNIE THE POOH  animated short "Winnie The Pooh and the Honey Tree" (1964), which later became part of the compilation feature "The Many Adventures of Winnie the Pooh.

Rabbit tries desperately to push Pooh out through his rabbit hole - no such luck.

Rabbit here digitally erased but Pooh's big booty remains - yet a bit more of the B/G is revealed... 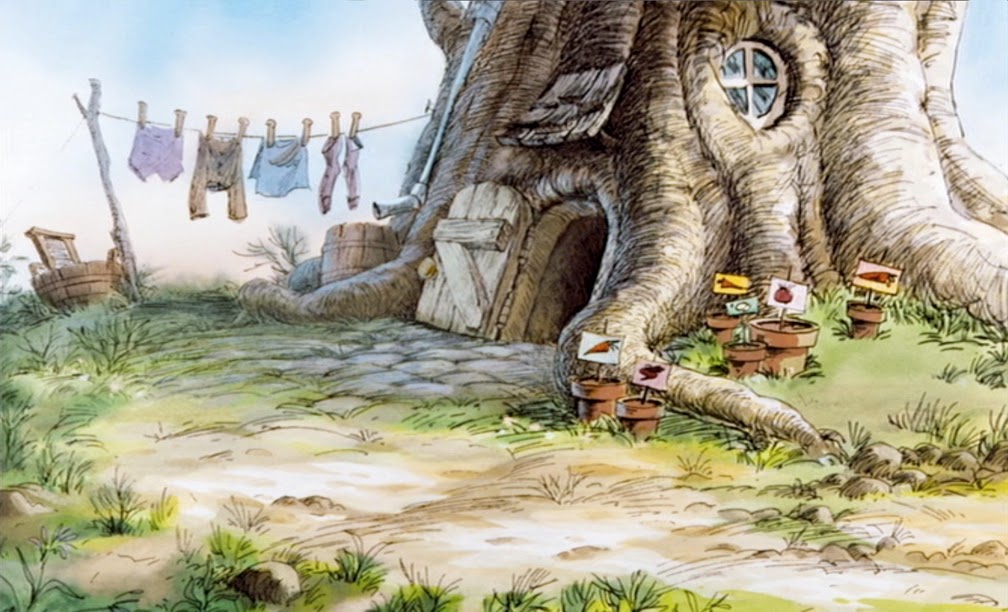 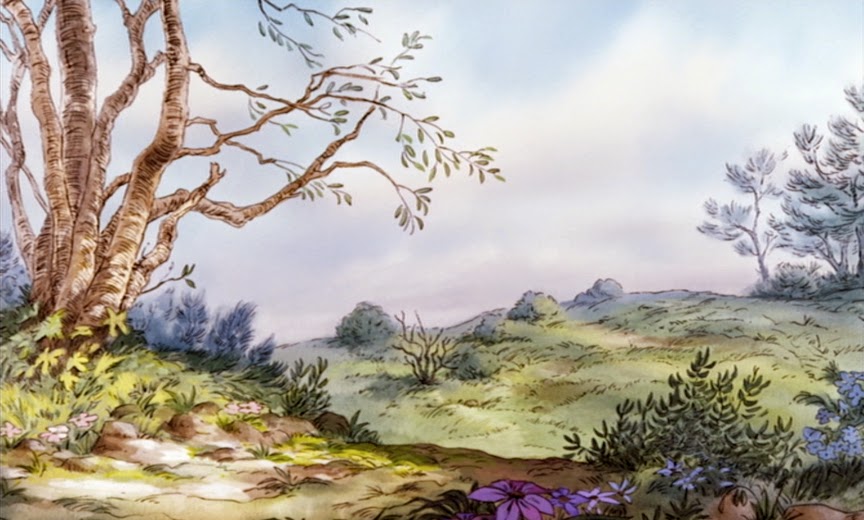 a lovely view of the Hundred Acre Woods, adjacent to the Rabbit residence!