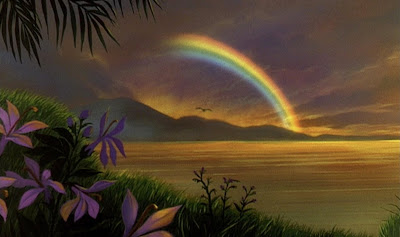 Today we're once again taking a look at art from THE RESCUERS. Scroll down to see two additional posts of digitally restored backgrounds.

THE RESCUERS level of artistry was very good indeed. While it certainly wasn't SNOW WHITE or FANTASIA, it was and is a beautifully crafted film.

Cost-cutting at the studio was always a concern, but especially after Walt's death. The eyes of THE RESCUERS mice had no whites, just a gray background. Legend has it Don Bluth was so incensed at this it was a key reason for his departure from Disney, which eventually led him to open his own animation studio.

The movie's poignancy was no doubt a reflection of many of the artists' feelings at the studio, as the older animators prepared to retire and passed the baton on to the younger animators.

It's a lovely, unpretentious and unashamedly sentimental film... perhaps that's why it is so endearing.
Posted by ROB RICHARDS at 2:54 PM

Actually, in RESCUERS DOWNUNDER, mice have eyes with whites, so this is something they changed from de first film.
Nice picture in the post.
Thanks for sharing.

I heard it tell that the whites of the eyes was not a 'save white paint' cost-cutting idea, look at all the other characters, it was in fact a move to make the mice more realistic, more mouse-like if you will, and less cartoony.

Thank you so much for the post you do. I like your post and all you share with us is up to date and quite informative, i would like to bookmark the page so i can come here again to read you, as you have done a wonderful job. On Pictame2, we created 'Trending Now' and 'Hot Users' pages and also related users suggestions for you to discover the most exciting users on Instagram.