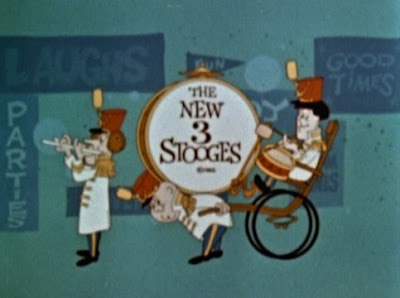 I usually limit the posts on our blog to background art from great artists and major studios, usually Disney.

Today is a rather bizarre exception...

"The New Three Stooges" was animated at Cambria Studios, a small studio once located in West Hollywood.

Despite operating on a shoestring budget, the studio was able to produce series which are fondly remembered for their imaginative and entertaining storylines, and for their inventive ways of compensating for budgetary limitations. Remember "Clutch Cargo?"

I had frankly forgotten I'd picked up a DVD of the series. When unpacking a box of DVDs after my recent move, I stumbled across this by accident.

The first cartoon I watched was "Let's Shoot The Piano Player." The ultra-limited animation is strictly kids' stuff, but there are some cute bits quite reminiscent of the Columbia films. (Did you know Moe Howard came up with most of the ideas for the original Stooges films?)

I was struck by the simple but eye-catching Old West design of this opening pan shot. It's lean but charismatic, don't you think?

I have broken up the pan B/G into right and left sections, as well as the final frame of the "No Chance Saloon," so you can take a better look.

Background artists for the series were Gloria Wood, Bob Inman and Bill Butler. 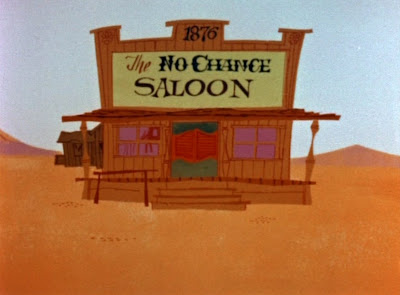 Beautiful! Can you please post more of this?? I'm looking for more western cartoon backgrounds!

Hey your blog is so nice, honestly I liked it. Well I want to tell you that I just watched the new movie "The Three stooges" and trust me guys I loved this movie. I think it is the best funniest movie of this year. This movie is the ultimate entertainment for all the viewers.
You should watch the three stooges movie and I bet you will enjoy it.

Everything is fine, am happy of your blog. Thanks admin for sharing the unique content, you have done a great job I appreciate your effort and I hope you will get more positive comments from the web users.
kizi daily, juegos friv al , friv 30 game

Given article is very helpful and very useful for my admin, and pardon me permission to share articles
here hopefully helped :