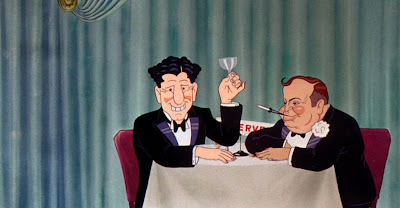 This is the single biggest pan background I've ever digitally re-created. Completed, it was 130 inches long!!!

I have included the entire reconstructed B/G, as well as segments so you can see details.

As the pan begins we hear the Looney Tunes melody, then see Leon Schlesinger (on the right) and his assistant Henry Binder (on the left).

Next we see a booth with two small chairs reserved for Bette Davis, and in contrast a HUGE booth for Kate Smith! (OK, youngsters, Google Kate Smith to get the joke.)

Finally, we see a table set set for the cast of the DAGWOOD comic strip (and motion picture) cast, complete with a fire hydrant for dog Daisy!

As usual, don't forget to click on images for the enlarged views.
Posted by ROB RICHARDS at 9:32 PM