A Word About ENCHANTED... 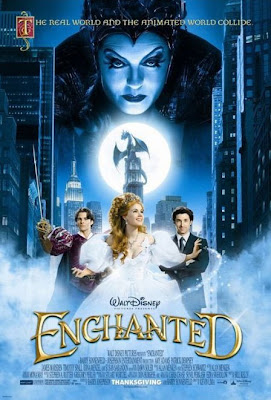 This blog pretty much always "stays the course" with its subject matter. However, the theatrical opening of ENCHANTED deserves, no, requires mention this weekend.

The Walt Disney Company has triumphed. The opening segment, in full-blown classic 2D animation is more than a joy, it is a masterpiece. It was created for Disney by former Disney animator James Baxter and his crew at James Baxter Animation. And it ranks among the best, most beautiful animation ever created.

Actually, the whole movie is a long-awaited return to the essence of what we've always loved about Disney: sweetness, humor, heart, imagination, dazzling visuals, irresistable music, and a happy ending!

And for those misanthropes who proclaimed 2D animation dead, I am happy to say you are completely and utterly clueless. At the El Capitan theatre in Hollywood (where I perform), I have watched the faces of guests light up with delight. There always was, and always will be something absolutely magical about drawings that move, these living illustrations with personality and feeling.

In this age of world-wide turmoil, how wonderful it is to spend a couple of hours with a movie that leaves you smiling, uplifted, and inspired.

Congratulations to everyone involved in this wonderful movie.

Run, don't walk to the theatre to see, and be, ENCHANTED.
Posted by ROB RICHARDS at 7:18 PM

Hmmm... I might have to check it out. Have to check the reviews to see if I can take my daughter to see it.

On the 2D note: the new Dragonlance direct-to-DVD movie is a mix of 2D and 3D. The 2D used in it looks almost "dated" and "80s style" which, I heard in an interview with the creators, was done purposely to harken back to the time when the novels first came out and reflect the typical "fantasy animation" feel.

I agree with you. I saw Enchanted this weekend and thoroughly enjoyed seeing Disney pay homage to its roots.
The animated segment was vivid and beautifully put together.

I wonder if I have seen you or will see you! I live right by the Arclight and go to the El Capitan all the time. I saw Ratatouille there, The Incredibles, and if they're still showing Nightmare Before Christmas I may go see that again.

Having heard all that I have about Enchanted, and especially now with your comments, I am definitely going up there to see it. Probably tomorrow evening, or maybe even this evening.

I've played over 4000 shows at Hollywood's El Capitan Theatre since 1999, so chances are pretty good I've played for you! It's my pleasure to play the "Mighty Wurlitzer" pipe organ before the movies. I am there most weekends, except when I'm away playing concerts.

Hi Rob, took the liberty to quote you on my blog, hope that was OK, regards, H

I couldn't agree more. Enchanted was the best 2d animation I've ever seen, it was /so/ lush and beautiful and the castle absolutely made my mouth fall to the floor.

The movie itself was wonderful, and I had a fantastic time :)

I can't wait to see it. Probably Mr. Baxter, Quasi and Belle's papa, was tired to realize brown or white horses for Dreamworks. I can't wait to see it on the big screen!Maybe the Shrek major didn't lost just the Rapunzel's hairdo...
I will see ir in London in 4 days,I'm shore I'll be "enchanted" by it!
Well that's all folks...ehmmm...Ah Ah!

Hey Rob, did we see the same movie?

I'm sorry to say, I have never seen animation more bland and phoned in than in Enchanted.

I'm also one of the few who actually thinks this is the phoniest "Disney film" ever. The entire production tires to be a Disney film but only in superficial sense... there is no heart or sincerity in the entire movie, just a cynical and corporate emptiness. Kevin Lima and Co. where obviously so busy throwing in cute little “homages” (rip-offs) everywhere that they actually forgot to put thought and love into this thing.

Example: Sleeping Beauty’s dragon was a terrifying beast and deadly. It scared children, as did Snow White’s witch, Pinocchio’s Pleasure Island, Fantasia’s Chernobog, etc. The “classic” villains were taken seriously. They had reasons for doing what they were doing, believed in their evil doing, and had sincerity. They were also SCARY.

Susan Sarandon’s silly queen was a parody of these villains, and therefore a joke. All she did was poke fun at the fact that she was a heavy in a fairy-tale film. “I will send her to a place were there are no happy ever afters… blah blah blah.” Or how about her dragon, which wasn’t the least bit scary or threatening because it was too busy chatting it up with Patrick Dempsey…

I believe this picture actually makes fun of Disney more than any Shrek movie could and how anyone could ever say that it’s a return to classic Disney storytelling is beyond me. Is this a sign of how far we have strayed? The filmmakers should be ashamed to call themselves Disney fans.

The original 30’s and 40’s Disney films were made by a visionary who set out to do something new. There was no visionary guiding this picture and it sets out to do absolutely nothing new. So sad, because with a clever premise and a gifted filmmaker, it could have been so much fun!

Just wanted to put a new view out there. I do enjoy your site.

how did you do that

hahah No wonder this guy has a Picture of Scrooge on his profile...

I thinks that´s the catch of the movie!!
Disney parodying Itself, and in a respectful manner, not like shrek where everyones still laughing at the fart jokes.
I´ve spoken!

I think the intro sequence is one of the most beautifully animated ever, with a gorgeous, creamy colour palette, not to mention amazing water-colour looking old school backgrounds. But maybe that's because I'm an animator myself who was inspired in the first place by Silly Symphonies, that was made way before my time :P . By the way, fantastic stuff on this blog Mr Richards! it's like a teasure trove to be able to appreciate all these bg's that you're presenting for all to see. thank-you!

Hey donald duck!! get a life! I love that movie, it was a great mix of reality and fantasy! I would like to see you do better buster!!

I currently work with the James Baxter Animation Team, and they are amazing!!! I feel so priveledged to be a part of their current projects, and they did an amazing job with "Enchanted" Thanks for posting this Rob!

I have to agree with scott. This movie was veery veery far from the old Disney spirit. I quote every word of your post.

A part from this the quality of the animations and of the 2d visuals is just stunning and perfect.

It's interesting the different views on enchanted. I personally like Enchanted, I love the backgrounds in the animation especially. The Villian is decent but I would have to agree that the dragon is the worst part of the film, maybe if they left her humor asside and let a full evil presona come through when she tranforms. I think as far as a love story goes it does well in that it has the "romantic" view of love and it has the "cynical" view of love crash together. I also wanted to say that I'm glad I found this blog and can't wait to see the background reconstructions of enchanted!