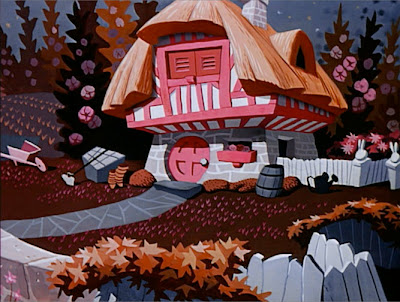 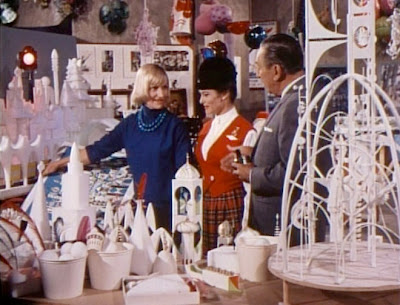 The animation art is, of course, the rabbit's house from ALICE IN WONDERLAND, for which Mary Blair's color styling was a tour de force.

(Note the quintessential Mary Blair color styling of her own outfit, two different hues from from the blue palette!)

"In" jokes have been part of the Disney animation department from the beginning.

So you tell me... Does this house look like Mary Blair?

To me it does look like Mary Blairs work, but I will not fully make up my mind till I see the art exhibit of her work later this month.

I never looked at it in that way, but I think you may be right. She had those distinctive bangs in most of the photos I've seen of her. Cute!

Gah! Mary Blair abounds lately! It's almost too thrilling for words! And yes it does look like Mary Blair. I think I might have a White Rabbit House Mary Blair concept somewhere around here... it would be fun to compare...

Though I always had interpreted the thatched roof as looking like a girl's hair, I never made the connection to Mary Blair's own distinctive hairstyle. Yet, now that you've pointed it out, it seems so obvious! Thanks for this fun revelation, Rob!

It does look like it and it also has the mark of a Disney setting, that which arouses the wish to be in it and at the same time some sort of taking care of it, be protected by and protective of...

It certainly looks like her. I found this post after looking at a January one. I feel like I'm getting quite an education about Disney animation. Thanks for the great site!